June 07, 2014
Hi there, my name is Vincent and I am an amateur photographer from The Netherlands. With this blog I will share a selection of my photos, just as my vision on the subject. As most amateurs I have a 500px account, recently opened a 1X account and have been experimenting with Pixoto. Somehow I never ended up creating a Flickr account. It just never appealed to me. While skimming through some photo books I concluded that a picture is nice, but a picture with a story is much nicer.

With this first post I will not go into great lengths to introduce myself. I guess it's better to just keep posting regularly to create  something like a 'blog portfolio'. Let's start with a shot that boosted my enthusiasm for photography. I bought a Pentax K-5 in 2011 ( a great camera that I've never replaced). Me and some colleagues - like Camiel - decided to take our cameras out after work. Time to explore the city! The following shot was almost taken accidental. We entered the tunnel and in a reflex I put the camera down on the floor and pressed the shutter. There was no time to loose as the person at the other side was about to disappear. I was lucky, the shot ended up better than I hoped for. 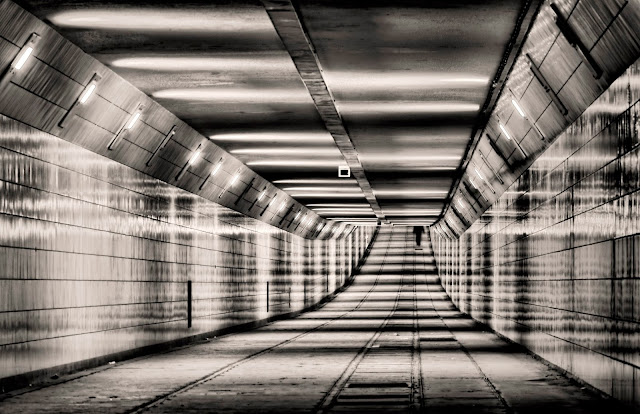 A strong image in a genre that I later discovered to be 'street photography'. Although one could argue that the architecture of the tunnel is the main subject of this image. Regardless what label it should have, I was proud of this shot. It encouraged me to take the camera out more often.

Note: post processing was redone some months ago to match with other photos in my portfolio.