The man with his lunch box

June 28, 2014
Last Sunday I went for a stroll in the city, the best way to get your mind clear after a busy week. I am lucky to live in Rotterdam, a very photo-friendly place: modern architecture, multicultural, lots of people in the streets and the city hosts the biggest port of Europe. I recommend visiting the city, and so does the NY Times. There's always something to spot with you camera.

After walking around a bit, I stumbled upon this guy. As you can see from the shadows, he was facing the sun directly. I guess he decided to enjoy the weather and didn't mind to position himself like a Rastafari in the middle of the street. 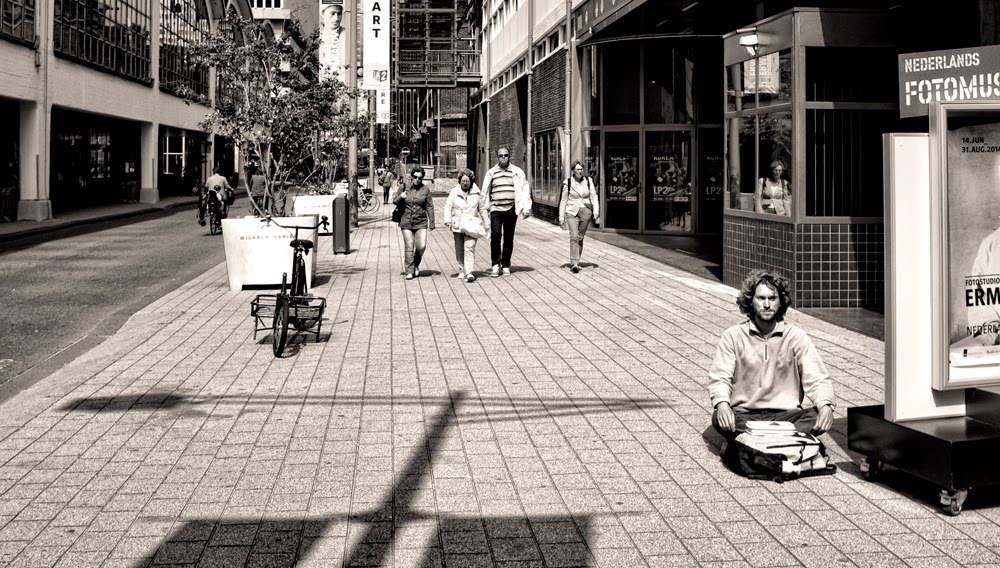 Honestly, it was tough to get this shot. As a photographer you constantly scan the space around you, trying to notice everything that's going on. I felt he was more aware of my presence than I was of his. I bet he even knew what was going on behind him. Unfortunately I needed to get closer to him as I was shooting with a wide-angle lens (this beauty). And since he was sitting on the streets, I couldn't use one of the text-book tricks for street-photography, like pretending to shoot the building behind him. That wouldn't really require to kneel down in front of him, would it?

Of course I could have asked him for permission, but I felt inhibited to disturb the guy. And if you were wondering, yes - he had his eyes open most of the time. Anyway, I decided to turn around, walk past the guy and get one shot. It worked and I am grateful for the people in the background. In my imagination they look like a pack of wolves ready to attack. But I am sure he'd outsmart them.

Funny remark: he was sitting in front of Rotterdam's photo museum.