The poor in Rome

August 08, 2014
Earlier this week I posted the article Rome captured in five photos where I described several characteristics of this magnificent city. From friends and family I received feedback that the article had a somewhat dark and sad touch to it. Well ... keep that thought as there is more to come. From the previous article:


"Every big city in the world deals with poverty, with homlesness as its ultimate expression. From all European cities I have visited, I've never seen as many people living in the streets as in Rome."

Let me add some photos to emphasise this statement. The following shot was taken in front of the Pantheon in Rome. As we arrived late at the site, we found the door closed and the square in front quite abandoned. One of the people still present was this woman, sleeping I presume. She found shelter in a dark corner next to the entrance of the building.

Is she really homeless? Open the image and take a closer look. Although a shower couldn't hurt her, she still seems to be dressed quite well. But would a regular person take a nap on a location like this? Then note how she leaves food (bottle, food wrapped in tinfoil, cigarettes) on the dirty streets. My conclusion is that she just ended up being homeless some days ago. What do you think?

The handicapped girl in the next shot was begging in the streets. I am sure she isn't homeless as she wears clean clothes and even died her hair blonde. Clearly someone is taking care of her. With her limitations begging might be a last resort to get some income. Then why not exaggerate a bit by sitting on skateboard and taking your shoes of? I would do the same. 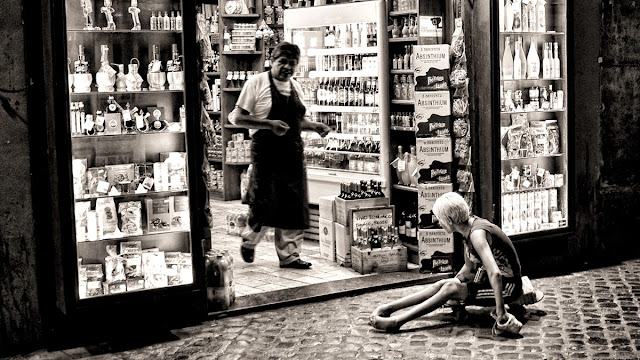 The shop owner gave her some money. Maybe as a trade to make her leave? I regret not taking the shot where he actually handed her the money. Unfortunately he spotted me and I chickened out. Next time I will just ignore this fear and take the shot. On the other hand, this photo now introduces some tention. It makes you wonder what might happen next.

Next is absolute drama. It's people like this that make you wonder if they are really in need or if it's just all an act. Hard to judge and soul tormenting. Maybe there is a fierce competition within the charity market? The poorer your image, the more you get. 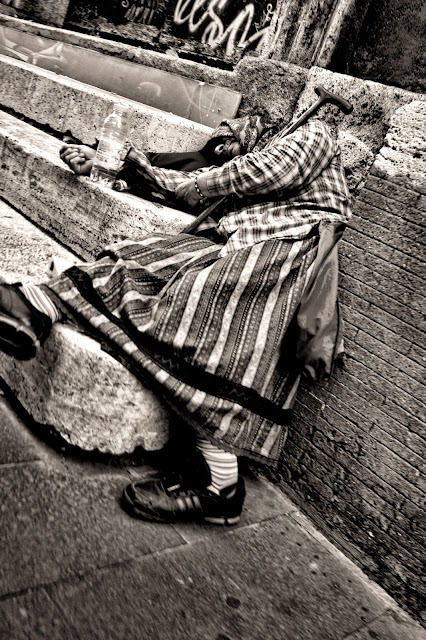 My analysis might seem cold. That doesn't mean I don't care. On the contrary, it's the reason why I show these pictures. Life if tough for many people in this world. Especially for the guy in the last shot. What might have happened to this man? Why did he end up in this situation?

This photo was taken during my previous visit to Rome (2011). In those days I was not into street photography at all. Yet somehow I decided to take this photo and I am happy I did. It's titled 'Nobody is watching' because ... nobody is. Every person in the square tries to ignore him. Maybe to not feel guilty? To pretend not seeing someone in need?

Next article will feature Franco, a guy who sold me a delicious panino!