August 06, 2014
Rome is a city full of history and enormous wealth. Then again, its also a city that displays decay and poverty. I spent three days in Rome and was unfortunately not able to fully capture this contrast. Nevertheless, in this article I share five photos that each portray a very different characteristic of Rome.

1. Religion
Rome is filled with churches and naturally hosts the Vatican City, home to the pope. Or 'il Papa' as the Italians say. The following photo was taken in Chiesa Nuova. It's not as new as the name does believe since its construction was finished in 1606. It's a place easily overlooked and not visited by many tourists. Good for me as I could frame this nun without any interference from other people. 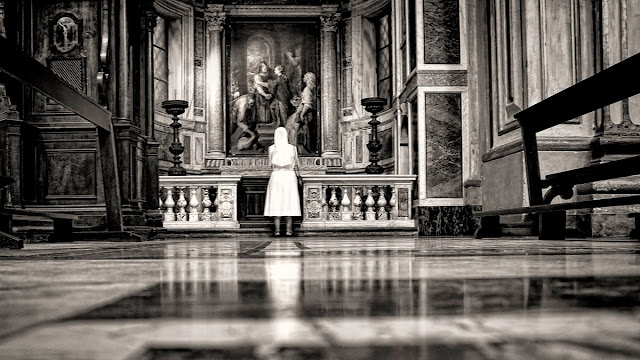 Unfortunately the shot is a little out of focus, but that doesnt' take away the power of the scene: an intimate moment between the nun, the painting and maybe even God. This scene could have taken place 400 years ago without any difference. Hence, a timeless photo.

2. Roman glory
Let's travel back another 1,500 years in the past: the times of Ceasars, gladiators and when Christians were being persecuted. No better place to depecit this than the Colosseum. This was my fourth visit to Rome and I have been to the amphitheatre every time. The more you learn about Roman history, the more impressive and horrific it becomes. 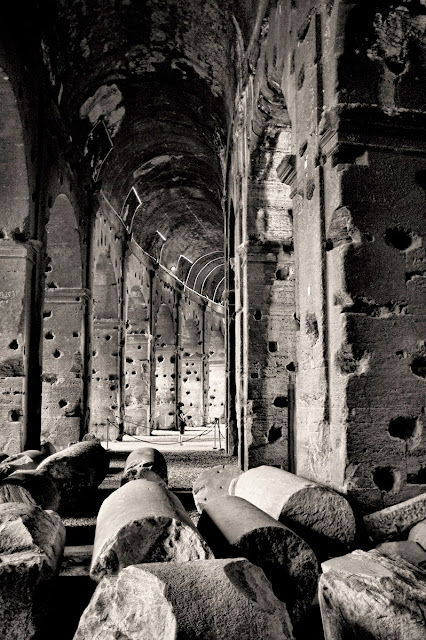 Open the image to take a closer look and note the woman standing in the center. This building is huge!

3. Poverty
Every big city in the world deals with poverty, with homlesness as its ultimate expression. From all European cities I have visited, I've never seen as many people living in the streets as in Rome. It could be that the Vatican attracts more homeless people, in hope for help and assistance.  In fact, the pope sometimes sneaks out at night to help these poor individuals. 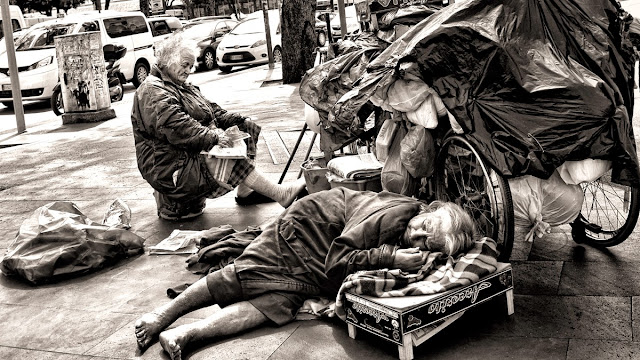 In Rome it's easy to encounters beggars, but that doesn't always indicate that those people are homeless. That's why I have selected the photo above. It is very clear that this couple lives out in the open. From the picture it seems that they were collecting paper, plastic and other materials to make a living. They were definitely not begging.

Note: read this other article for pictures on poverity in Rome.

4. Traffic
There's just one word for traffic in Rome - ANARCHY - and I happen to love it. I have been driving in Rome with my car and it's just fun. Of course you need to pay attention, but it gives a kick to get around. Look at the scene below. Have you ever seen a crowd so eager to see the light to turn green? 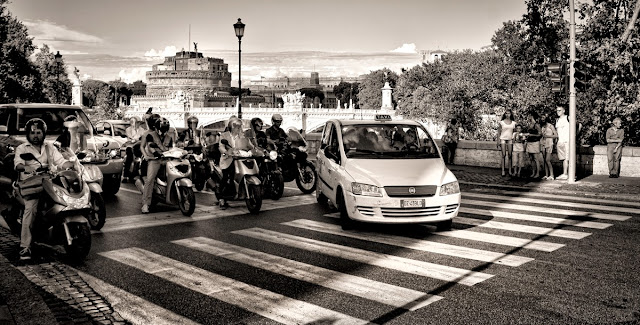 Don't forget to note the building in background. It's Castel Sant'Angelo, once erected as Hadrian's mausoleum in 138 AD. Since the 14th century it functions as the pope's refuge location. If you're ever in Rome, then notice how they constructed a fortified bridge between Saint Peter's and this location.

5. Tourists
For a while I have been doubting about the last characteristic to describe. Food should be one, just like wealth, fashion or the Italians themselves. But no good pictures there. Rome's decay on other hand was easy to capture. It really struck me. The city's nickname is Caput Mundi or 'capital of the world'. A translation from German would be more appropriate, a 'broken world'. The economic benefits by tourism are certainly not used for the city's maintenance. Which brings us to the tourists themselves. 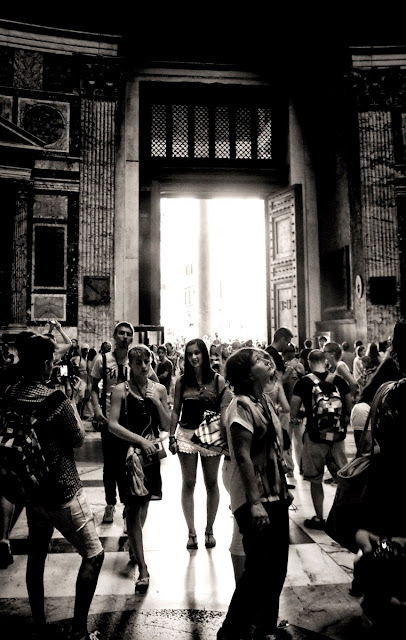 This shot was taken inside the Pantheon and shows a couple trying to take a photo. That's almost impossible as the place is crowded with people. Just as the entire city . It's almost no fun anymore to travel to these kind of hot spots. Travelling should be a luxury again ;)

This was Rome in five photos ... and I guess not all pictures and themes you had expected.