August 12, 2014
After a 'dark' article on poverty in Rome, it's now time for a happier note from my last trip to Italy. Meet Franco, the Italian sandwich man. Me and my girlfriend met Franco during a day trip to Roccaporena, the birth place of Saint Rita. As you can see, he has a nice little food shop going on. 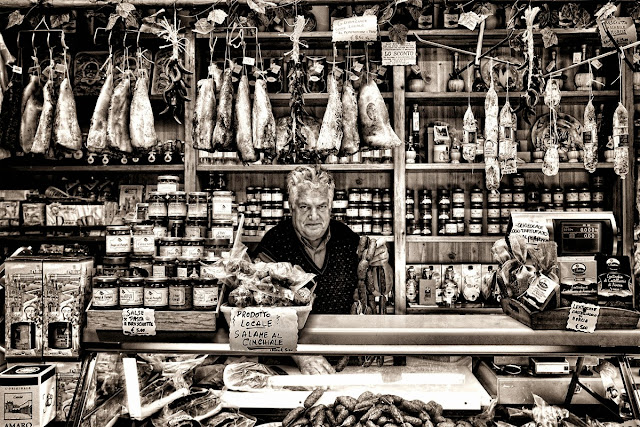 We visited Franco's to get a nice sandwich after a hike around Roccaporena. The prosciutto was great and we started a conversation about the little town. In Roccaporena (I love to repeat this name) everything is scaled for large numbers of tourists ... but it seemed we were the only ones there. Franco explained how business was heavily declining as a result of the crisis.

Before leaving his shop I asked if it was possible to shoot his portrait. Although he was a bit of a grumpy guy, Franco from Roccaporena immediately approved. Without hesitation he grabbed the sausages and posed for the camera. The result is a nice memory of Roccaporena. To support his business we bought a local speciality, a liquor named Lacrime di Cinghiale or 'tears from the boar'.

Note: in case you ever end up in Roccaporena, then visit Franco in 'La botega del nonno'. Hard to miss.