The girl with her eyes closed.

July 05, 2014
Last article I wrote about setting up a trap and wait until a 'victim' shows up in the frame of your picture. The following photo was composed in almost a similar way. This time without setting up tripod, but by choosing a location where people pass regularly. In this case by bicycle. 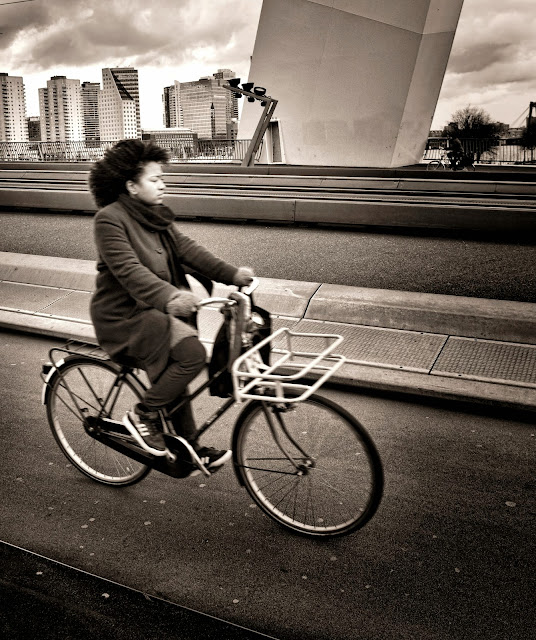 This shot was taken on the Erasmusbrug, on the side where people descend from the bridge. This feels kind of comfortable as it allows to take photos of people while they pass you in a high speed. Furthermore, the location is a tourist hotspot. Walking around with a camera doesn't make you a freak. After some attempts I decided to keep this one:

1. The girl has her eyes closed and seems take refuge in her thoughts. At least, that's what I like to believe. It is more probable that she saw a guy with a camera and decided to look away, but let's not ruin this though right away.

2. No other people seem to be in the shot. A large city, big roads and just one person on a bike ... with her eyes closed.  It's as if she turned the city into a tranquil place by closing her eyes. We see the city as she wants it to be in her thoughts - a snapshot of a dream.